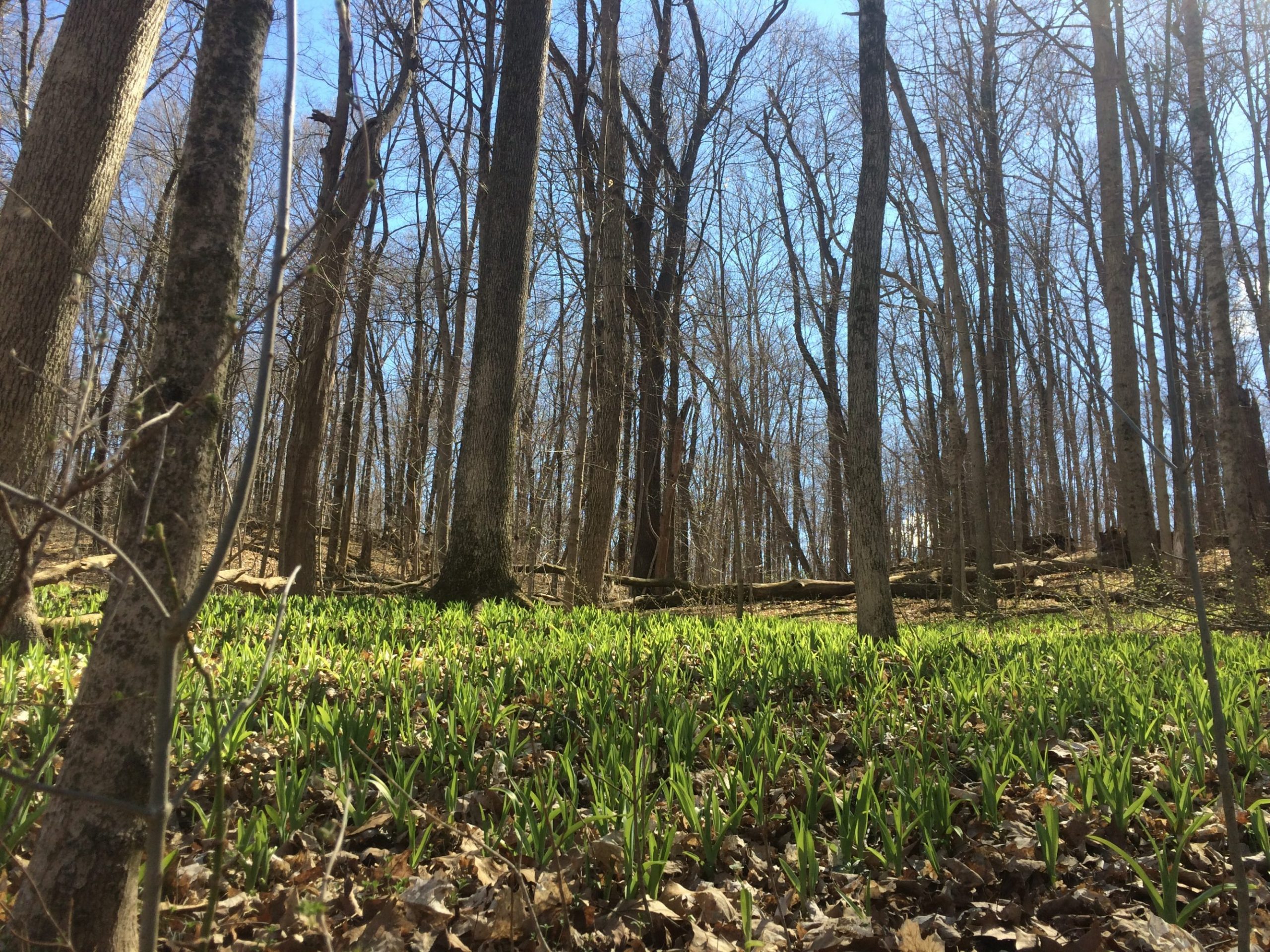 ACRES Land Trust has expanded Tel-Hy nature preserve with a 6.9 acre donation by Phillip Smith, a friend and neighbor of Hy and Lorraine Goldenberg, donors of the existing Huntington County preserve. Smith, a 1968 wildlife management graduate of Purdue University, sees donating his land as a natural extension of his life.

“I love this place. I wanted it preserved,” said Smith. “And I didn’t want just one or two people to enjoy it. I wanted to share it with everybody who enjoys nature.”

The property has views of two waterfalls. Smith explained that what drew him there “was the sound of waterfalls. The bottom of the Wabash River is solid limestone; there’s no dirt.”

Adding to Tel-Hy was a priority for ACRES. Smith’s addition completes protection of the whole escarpment zone, the area from the top of the bluff (pictured) to the river bank, and includes a creek with an exposed bedrock bottom. ACRES prioritizes additions to existing preserves to complete protection of geologic formations, increase undisturbed natural habitat and as result, over time, increases bio-diversity.

Smith not only knew the Goldenbergs, but also Helen Swenson, donor of ACRES’ Wing Haven preserve outside Angola. For three summers in his youth, 1959, 1960, 1963, he worked for Helen Swenson at her Wing Haven family resort (located across from her and late husband Ben’s former home, now Wing Haven nature preserve, named for their popular resort).

Smith’s interest in natural resources extends to his youth. Growing up on a farm near Clear Lake, Smith remembers days spent in the woods alone. These youthful adventures and his Wing Haven experience led him to Purdue. His education was interrupted by two years of military service with the U.S. Army. After graduation he worked for the Indiana Department of Natural Resources at what was then the Huntington Reservoir, where he became manager. He later worked in a hardware store in Markle for 33 years, “enjoying doing what I wanted.”

Smith knew of ACRES, attended a few events, then talked with ACRES a few years ago as he considered whether and how he might protect the land. He and ACRES finalized the plan, and the discounted sale received additional support from the Indiana Heritage Trust and the Huntington County Community Foundation.

He has watched a few generations of bald eagles being raised along the river near his home. The property is on a birder route, part of an annual collection of call data. Red fox chase each other in his gardens “fast as lightning, and then they crash into and destroy my moonbeam coreopsis, flattening them!”

Smith said, “I have enjoyed Tel-Hy for 40 years, free of charge, especially in winter. I knew Hy, and I appreciated him, too–he was a character!”  (Tel-Hy includes Hy’s outhouse collection.)

Smith has a life estate in the property, so he will continue to watch eaglets grow up and foxes chase each other along the Wabash River while the addition to the ACRES preserve remains closed to the public.

About 2 summers ago, while hiking Tel Hy , we noticed a curious looking rock. It was in the grasses near a fireplace and old picnic table, not far into the preserve. It looked as if it had not been there a long time but it would have been too large and heavy to have been carried to that spot. I took a photo of the rounded rock and have often thought of it since then. Was it natural to the area? Was it a kind of meteor that fell there? Who? What? Why???

Sharon, glad you enjoyed exploring our Tel-Hy preserve! If possible could you send any photos to [email protected] so we could take a look at it? It may just be a field rock that was moved out of the way by equipment, I'm checking with the rest of the ACRES crew to see if we know anything about it!