Coming together to protect land

ACRES 12 founders became our first members, each contributing $5, including $2 memberships, toward the goal of preserving land – forever.

The Edna W. Spurgeon Woodland Reserve in Noble County became ACRES first property, donated in 1961 by its namesake. At the time, the organization was named Allen County Reserves. With the acquisition of Edna W. Spurgeon’s land, outside of Allen County, the board moved to change the name to ACRES – an acronym for Allen County REServes.

Volunteers are still vital to ACRES work protecting and managing the preserves and supporting communities in celebrating their beloved natural areas. Learn how you can add your story to this rich, living history!

Stories from the land

Each preserve holds countless untold stories - from the land itself and from the people who love it.

By Evan Hill, Stewardship Director ACRES can make better decisions on restoring and stewarding our land when we know more about what our local landscape looked like. A book called The Fifth Annual Report Of The Geological Survey Of Indiana Made During the Year 1873 provides detailed accounts of how several counties in our service ...

ACRES: Now and Then

ACRES is dedicated to protecting land forever, and we’re also committed to preserving all of the other things that come with land, from historic photos to correspondence with land donors. In recent years, we’ve put a lot of effort into digitizing these artifacts and ensuring they are stored in an acid-free environment so they can ...

By Chris Fairfield This article is part of a series highlighting preserves where ACRES will retire trails as part of our comprehensive plan to update visitor amenities at nature preserves. For a complete list of retiring trails and public access updates, visit acreslandtrust.org/raisingourstandards. Since 1960, ACRES Land Trust has worked hand-in-hand with private landowners to permanently protect 7,300 ...

When ACRES acquires new property, we become steward of both the land and its records. These files include everything from legal documents, like deeds and wills, to artifacts like newspaper clippings and handwritten notes. Two ACRES volunteers have spearheaded an effort to digitize records for all ACRES properties. Thanks to their hard work, these records ...

ACRES protects more than land. We also work to protect the history of our land donors. Their stories and artifacts provide a glimpse into the past, an explanation of who they were and how they cared for and loved the land before ACRES. Join local journalist Kevin Kilbane as he uncovers the story of a ...

“From our understanding of nature and our love and respect for it will grow an ethical basis for our defining our proper relationship to it.”

This mind-opening paper tells the compelling story of how people, plants and creatures sustain life on earth.

ACRES has reprinted this paper to celebrate our 60-year anniversary. You can read this paper online, for free. If you are interested in a printed copy, please call ACRES at 260-637-2273 or email [email protected] 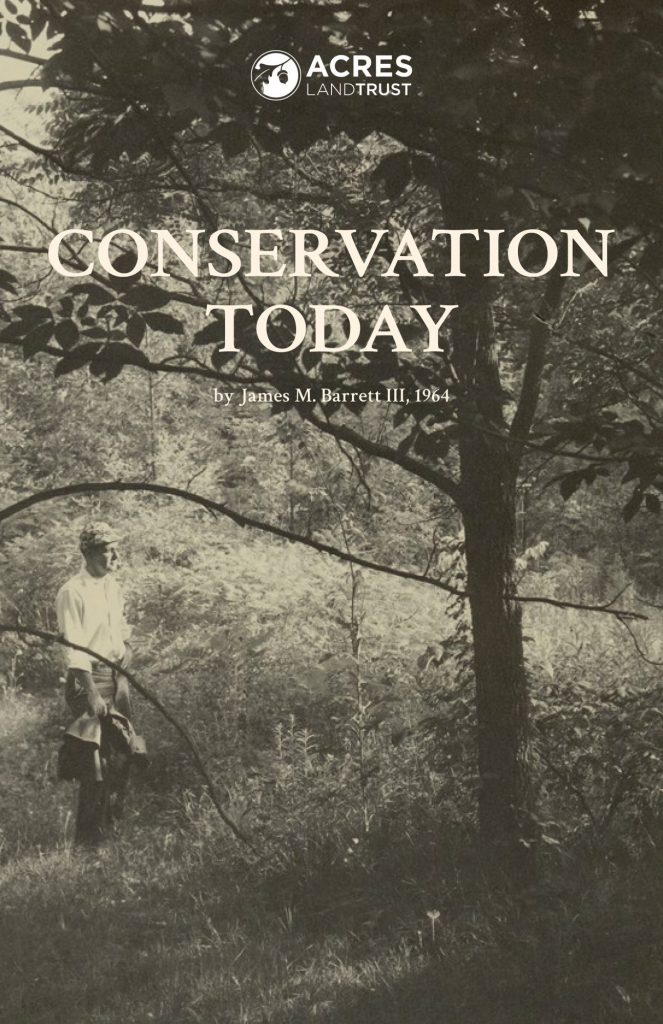