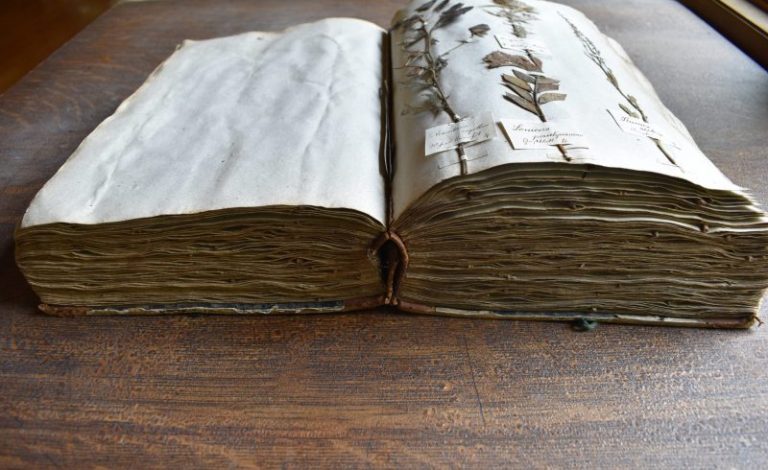 ACRES protects more than land. We also work to protect the history of our land donors. Their stories and artifacts provide a glimpse into the past, an explanation of who they were and how they cared for and loved the land before ACRES. Join local journalist Kevin Kilbane as he uncovers the story of a rediscovered historical book.

August Detering was not quite 21 on April 21,1860, when he boarded the ship Teutonia at Hamburg, Germany, and sailed for New York and a new life in America. The few possessions Detering carried with him included his treasured herbarium: a hardcover book the size of a family Bible. The book was filled with 167 pages of dried plant specimens he had begun collecting in 1857, near the village of Haldem in northwest Germany. About 160 years later, ACRES Land Trust has helped return the herbarium to Detering’s homeland. It’s a story of a hardworking young man, of sadness and of generosity. It’s also a tale of deep love of the land, including a parcel now protected forever as an ACRES nature preserve.

Born in 1839, in Hunteburg, Germany, Detering was about 18 years old when he started his herbarium. On each page he glued from three to seven plants—both natives and some garden species. Today they remain firmly attached, with leaves and flowers flattened out carefully to show them in detail. “The color is surprisingly intact,” said ACRES Executive Director Jason Kissel as he carefully turned through pages in mid-August. Detering’s precise handwriting identifies specimens by their Latin scientific names. (If he wasn’t sure, he didn’t guess.)

For Kissel, this rare glimpse of plants growing 160 years ago also raises a question: A few specimens are now problematic invasive species here. Could they have arrived with immigrants such as Detering who, like him, grew them as reminders of home?

Census data, plat maps and records obtained through genealogy research show Detering arrived in New York May 8, 1860. By mid-June, he had moved to Allen County, Indiana, where he worked as a gardener. In fall 1862, he married Louise Marie Holzer in Allen County. Within a year, the couple moved to Dearborn County in southeast Indiana where the first four of their eight children were born between 1863 and 1869. The family moved to Noble County in late 1869, settling on the southwest side of Round Lake, northeast of Kendallville. Detering grew produce and plants there, then sold them in Kendallville. “Sweet Potato and Cabbage Plants a Specialty,” notes an 1874 atlas of Noble County. Louise died in December 1877, leaving August with eight children about ages 1 to 13. When August died at age 45 on Sept. 2, 1885, the farm passed to oldest son Henry, about age 20.

ACRES unknowingly connected with this herbarium story about 35 years ago. In her will, Henry Detering’s daughter, Esther, gave ACRES her family’s 54-acre farm, now known as Detering Nature Preserve. By the 1950s, the family had stopped farming the land, Kissel said. Nature gradually reclaimed it. Today, towering wild cherry trees dominate a woods also home to oaks, maples, hickories, walnuts and wildflowers. One trail meanders through the woods while another leads to a clearing looking out on Round Lake.

“This land… meant so much to her,” Evelyn Thiem, 88, of Kendallville, said of Esther Detering. They had become close friends in the 1950s while working at a Kendallville bank. Esther lived in Kendallville in her later years, never married and had no direct heirs. Knowing Esther wanted to save her family’s land, Thiem told her about ACRES and put her in touch with members.

Although Esther was born after the death of her grandfather, August Detering, she had saved his herbarium. When Esther died in March 1986, she left the herbarium to her friend, Evelyn Thiem, who stored it in a closet for more than 30 years. About a year ago, Evelyn rediscovered it and showed it to her daughter-in-law, Cathy Thiem, who knew about ACRES’ connection to the Detering family. She asked if ACRES wanted the book.

Because August Detering had collected the plants in Germany, ACRES staff decided its best use would be at a German museum. “To me, that is pretty special,” Evelyn Thiem said. “I think Esther would like it, too.”

ACRES asked members Geoff and Josie Fox of San Jose, California, to find a German museum interested in the herbarium. (Geoff speaks German, and the Foxes enjoy traveling, Kissel explained.) Geoff said they searched online near Haldem, where August Detering had collected his specimens, and they connected with Museum am Schölerberg in Osnabrück, a natural history museum with an environmental education center. The museum also works with an organization like ACRES to educate students and the public about nature, said Francie Neinhuis, a biological preparator at the museum. Purdue University in West Lafayette has shipped the book to Germany

Neinhuis said that although Museum am Schölerberg has a few herbariums, the Detering collection will be the oldest. Neinhuis explained that the Haldem area once had different types of bogs that were destroyed by people and businesses digging for peat. Today, the water areas have been restored, and the area is now protected in three nature reserves. “It actually is a very important area for migratory birds to rest,” she said.

Neinhuis plans to have digital photographs taken of pages in the Detering herbarium and the museum’s other herbariums. Scientists can use these photos to study plants without damaging the original collections. Neinhuis will send ACRES copies of these photos that could be used for a joint exhibit about Detering and his herbarium. Then ACRES and the museum in Osnabrück can share the story of a young man’s love of plants, and his family’s deep devotion to the land.

Thanks for this, I always enjoy our neighbor Kevin’s writing & we recently visited the preserve. Looking forward to returning when the bridge is up & we can do the other loop.