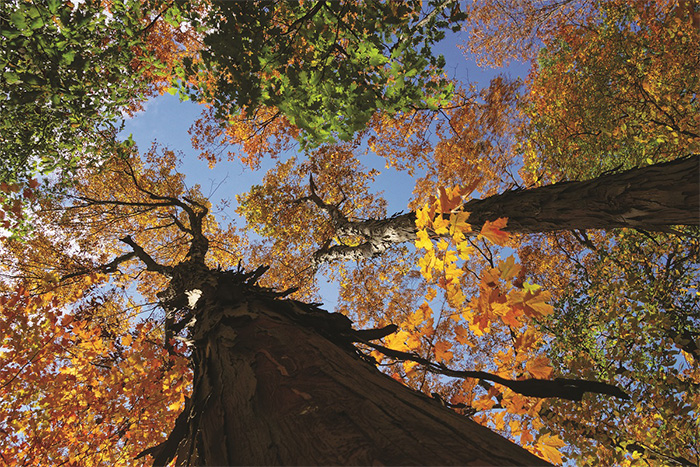 “A living memorial such as this is better than a tombstone.”

These words were spoken by Arthur W. Hammer at the dedication of the Anna Brand Hammer Nature Preserve in Wells County. Art (as he was known) purchased the 40 acres in 1951, gifted a primary part of it to ACRES in 1982, then expanded it through his Last Will and Testament in 2004.

The property was partly cultivated and partly forested. It became a place that he and his mother, Anna, would visit to enjoy nature. Art said, “If you wanted to go out there in the afternoon, it was like having your own park. I go out there and read the newspaper. It’s kind of a retreat.”

Art Hammer lived and worked in Fort Wayne. He played and supported competitive tennis. He dedicated himself to preserving, revitalizing and creating natural sanctuaries in and around Allen County. His land efforts went from seed to landscape to habitat. He collected tree seeds from places like McMillen Park, Lutheran Hospital and Allen County Public Library to plant and grow into hundreds of trees. A reporter once remarked, “His face and eyes light up as he speaks about the more spectacular specimens he started from seedlings.”

Another of his gifted properties is the Art Hammer Wetlands in northern Noble County, on the banks of the Elkhart River and Waldron Lake. From 1986 to 1994, Art wisely negotiated with neighboring families and family estates to collect and care for the 356 acres. Then, from 1990 to 1995, he intermittently gifted parcels to ACRES. This vital wetland preserve is now partially bordered by neighborhoods of lake homes and private properties.

Although Art Hammer passed in 1994, he posthumously continued to care for his beloved land by willing it to ACRES Land Trust to be preserved forever. Art said, “I’ve always thought buying ground was better than leaving money in the bank.” He formally planned his and the land’s eventuality by willing financial support, a portion of the sale proceeds of his adult home and other specifically transferable property to ACRES for its service to his and to other natural settings. Three of the many properties he willed to ACRES as Allen County preserves are Cypress Meadow, Little Wabash River Nature Preserve and Herman F. Hammer Wald Nature Preserve.

Cypress Meadow on Zubrick Road in south Allen County is now a 19-acre natural oasis in an industrial area near the Interstate 69 corridor, just south of the Vera Bradley headquarters. After purchasing this formerly farmed land in 1993, Art transformed it into a diverse forest habitat surrounding a beautiful pond, including a small cypress stand to be enjoyed.

Little Wabash River Nature Preserve is 24.30 acres on Ernst Road just west of the Fort Wayne International Airport. The land was once part of the NE-AH-Long-Quah Reserve. Art purchased the parcel in 1980, constructed and stocked a pond, planted trees and established it as an IDNR classified wildlife habitat. In a typewritten report from the ACRES archives, an unknown author wrote, “Art loved those trees, knowing the exact history for nearly every individual one of them … he pruned them and helped keep back the herb competition in their early years.”

Herman F. Hammer Wald Nature Preserve, a 70-acre property on Rupert Road in Grabill, is named for Art’s father, who immigrated from Germany in 1892. The preserve continues to memorialize the compassion Art’s father instilled in him as they planted and tended trees at his boyhood home. Once cultivated farmland, this preserve is now a maturing forest habitat. Art gifted portions of the property to ACRES during his life and willed a remaining portion at his death.

Arthur W. Hammer set a fantastic example for individuals and families to come together in reverence for the land, their heritage and legacy. He set a gold standard for gifting and preplanning land into forever care with ACRES Land Trust, for the benefit of all.

More Ways to Give