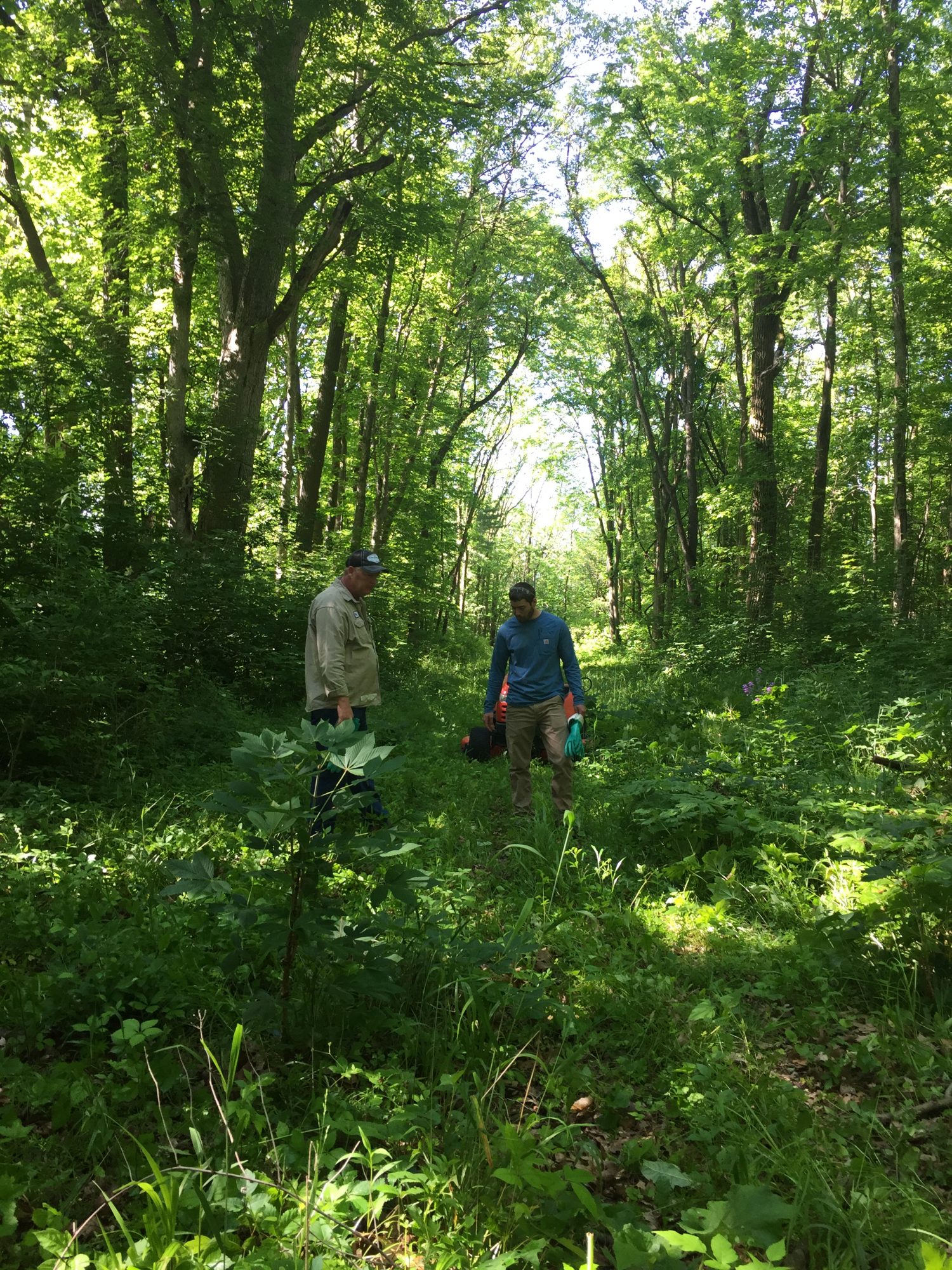 Part of being responsible stewards of the land is ensuring native species have the resources to flourish. Sometimes, that means breaking out the tools and combatting non-native plants that invade the area, choking out native life. Director of Land Management Casey Jones and crew give us an update on two non-native invasive species projects going on around ACRES Land Trust preserves.

ACRES has invested in eradicating Japanese stiltgrass, a non-native invasive plant newly identified in northern Indiana in late 2015. In 2016, we closed Little Cedar Creek Wildlife Sanctuary (LCCWS) to prevent the plant’s spread, and we’ve been fighting it since.

“This year we’ve seen no Japanese stiltgrass along the trails of LCCWS,” reports Evan Hill, land management specialist. “It’s mostly coming back only on the perimeter.”

“Chapman Road looks good too, thanks to a willing partnership with Robb Biggs, foreman, Allen County Highway Department,” adds Jones. A variety of land managers joined efforts to suppress the invasion, attending training and a workday.

For example: Ray Burns, right of way foreman with REMC of Noble County, met with ACRES on an easement adjoining the Dr. Frederick O. Mackel Nature Preserve preserve to learn how to win the fight (pictured above, left, with Evan Hill, ACRES land management specialist).

Jones’ research, and his partnership with non-native invasive plant specialists, led the team and partners to carefully time the spraying of clethodim, a grass specific herbicide, with mowing and growing schedules. For efficiency, ACRES interns carried iPods synced to global positioning software (GPS). Their tracks were monitored, so as they return to a site, they can cover new ground.

United States Department of Agriculture (USDA) Environmental Quality Incentives Program (EQIP) funding helped fight Ailanthus, or Tree of Heaven, on this preserve. The fight is so successful that the place is now an “unnatural disaster” with downed trees piled up. The land management team will bring in heavy equipment to remove the dead trees, making space for native plant growth and upcoming restoration work.

Want to lend a hand in cleaning up non-native invasive plant species on ACRES preserves?

Join us for a preserve work day at 10 am on Saturday, November 3. We’ll wrangle Autumn Olive at the Tom and Jane Dustin Nature Preserve. Tools and gloves will be available, but feel free to bring your own.