Students document life at one preserve 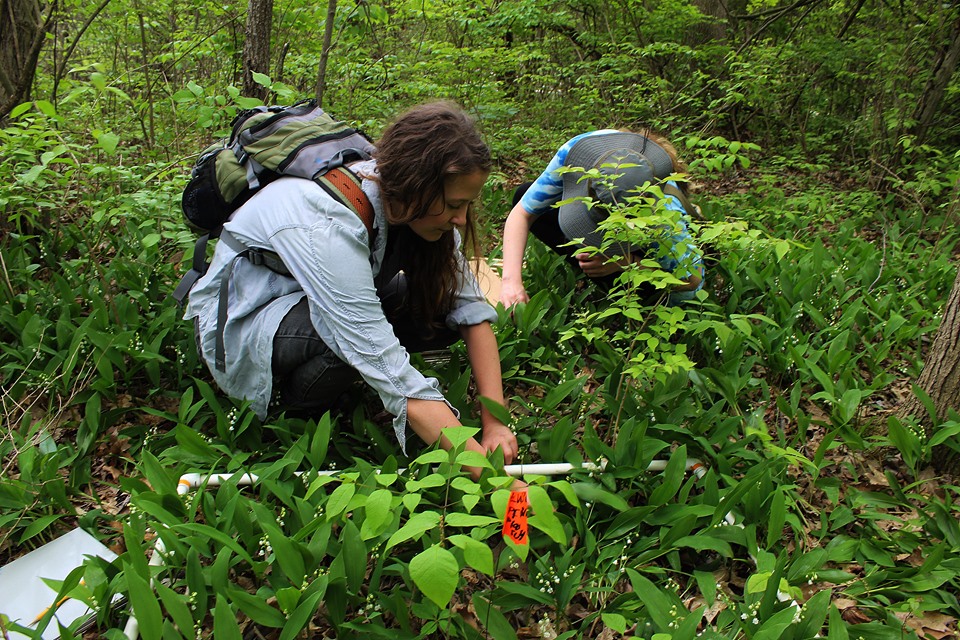 Students document life at one preserve

Although ACRES protects many preserves with notable features like waterfalls and other unique formations, every ACRES preserve holds hidden gems sometimes seen only through closer inspection.

In 2019, a group of students from Purdue University Fort Wayne set out to conduct an ecological and floristic survey of Little Wabash River Preserve. The southwest Allen County preserve protects 24 acres of floodplains and forest near Little River, a tributary of the Wabash River.

Recent graduates Tessa Aby and Joanna Stebing led the survey. Since the last survey was from 2010, both were eager to update the site’s records.

“This research can help us understand what plant communities are present and how they change through time,” Stebing said.

During the year-long survey, Aby and Stebing frequently visited the site to record species in the understory, midstory and overstory of the forest. They also catalogued all plant species, birds and insects they found.

“That was the most time we’ve spent at a site, ever. You get to know the curves of the trails and where to see certain birds or plants. We developed this special relationship with the site. I feel like we got attached to it,” Stebing said.

While surveying the floodplains, Aby and Stebing discovered an undescribed species of wild bergamot (Monarda fistulos).

“We were thrilled! The state botanist, Scott Namestnik, even had us call to confirm what we’d found, and take a sample,” Aby said. “It’s potentially a new species or a new subspecies of the floodplain wild bergamot,” Stebing said. “There’s only a couple sites in Fort Wayne where this particular wild bergamot has been spotted, and one site happened to be Little Wabash River.”

Another point of interest was an 11-acre field. Since ACRES acquired it in 2015, the area has been left to return to nature. Here, species like Slender Ladies Tresses orchids (Spiranthes lacera) have moved in as the forest reclaims the open area.

It was fascinating to see the habitats change throughout the seasons. They noticed something new during every visit. “From spring wildflowers to warm season grasses, it was amazing to see the seasonal changes up close and personal,” Aby said.

They were able to observe birds and insects throughout their life cycle. “In spring we saw caterpillars and would take note of what plants they were on to help identify them,” Stebing said. “For example, we found a caterpillar amongst hackberry trees, and later identified it as a Hackberry Emperor (Asterocampa celtis). We started noticing small details like that, and making these connections. It was really rewarding!”

Aby and Stebing hope sharing their findings will inspire others to protect land, including natural areas that aren’t remarkable at first glance. “Some people might consider it a mundane patch of woods. But when you really spend time there throughout the year, you see how much it changes and how much life is there,” Stebing said.

Aby added, “It’s possible that someone has a passion to protect one of the species of plants, insects or birds we found. They can protect that species and its habitat forever by supporting ACRES.”

The trails at Little Wabash River Nature Preserve are scheduled to retire Dec. 31, 2021, as part of a four-year plan to improve visitor amenities at ACRES preserves. Although daily public access to this property will end, the natural communities documented in the students’ survey will remain protected forever. “I think it’s exciting that ACRES plans to retire that preserve, both to help manage it better and give it a much needed rest from human impact,” Aby said.

Thank you, Tessa Aby, Joanna Stebing and the rest of your team (Madison Beckstedt, Liz King and Zach Heck), for sharing your survey results with ACRES!

This article originally appeared in the Summer 2021 ACRES Quarterly, mailed to members each season. The 20-page Quarterly features ACRES news, stories and events. You can subscribe by becoming an ACRES member with a donation of $20 or more. Click here to learn more!

Great work! It is super exciting to learn about all the great ecosystems in our area. It's so awesome to see a field or woods spring back to life with such a small amount of effort, like leaving it alone. Keep up the good work!

Thank you, George! We agree — it's so encouraging to hear about these ecological "wins", and we're grateful to Tessa and Joanna for sharing their findings. ~Bridgett Hernandez, ACRES communications manager