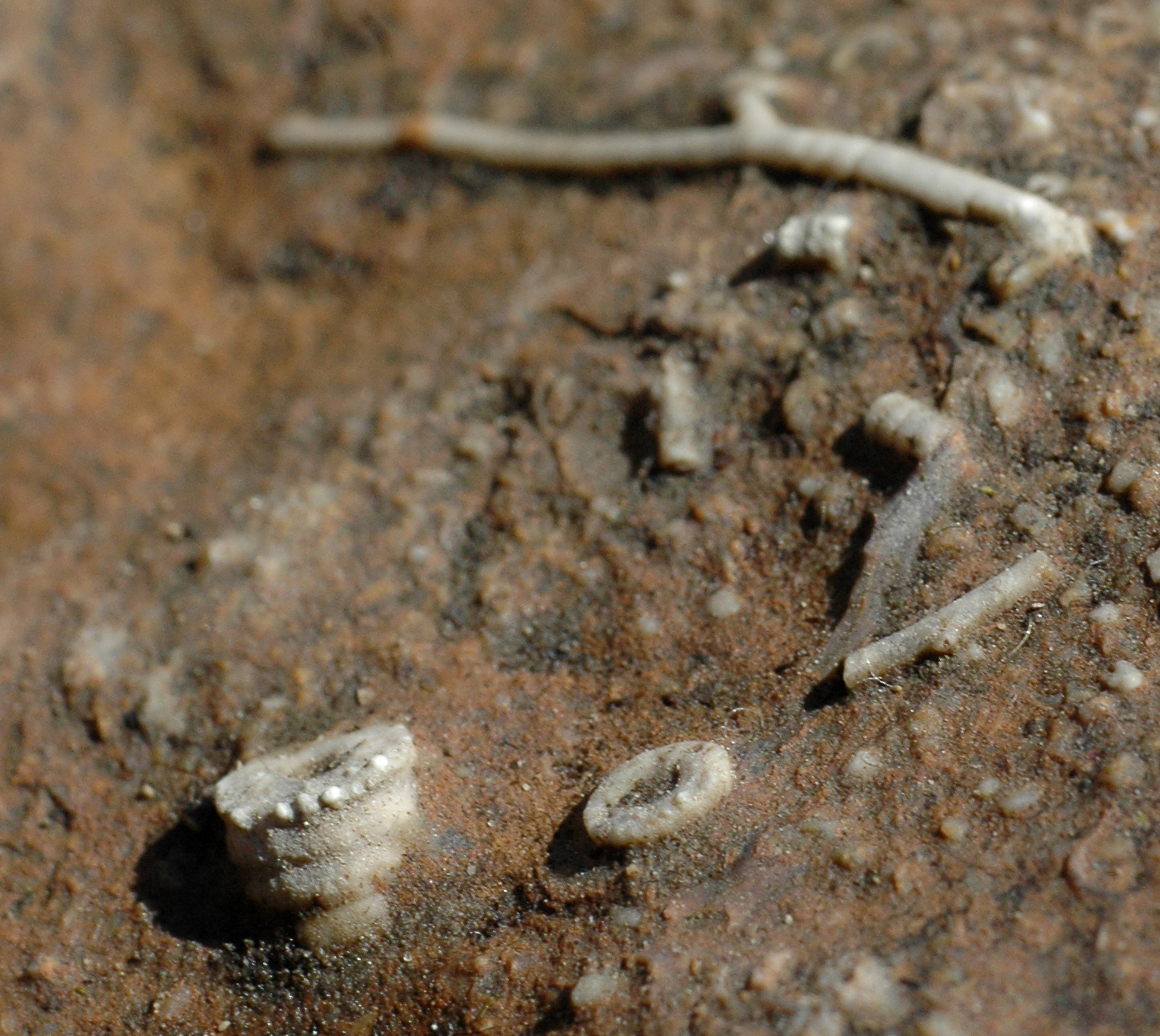 [Editor’s note: While it may be difficult to imagine today’s snow-covered Midwest was once a shallow sea, explorers of last Saturday’s Creek Stomp – Winter Edition at Hathaway Preserve at Ross Run had the opportunity to see firsthand what ancient wonders this place holds. If you missed the event or if you did indeed stomp with us, enjoy this article from our Quarterly archive on fossils. And keep your eyes peeled for our annual summer Creek Stomp in August – TBD!]

The Midwest was once a shallow saltwater sea. Then clay was carried here by rivers from eroding mountains that were once in Pennsylvania. Clues to this previous time are buried in our land. When ACRES preserves land, these clues are preserved as well.

Frequently, paleontologists use modern examples to determine how ancient organisms lived. These are good starting points to understand how life was the same or different long, long ago.

Many of the critters that lived in the shallow sea of ancient Indiana have modern counterparts. Bivalve mollusks (like clams), gastropods (snails), crinoids (the upside down sea stars on a stick), and the most common shells (brachiopods) are all found in fair abundance.

Brachiopods look a lot like clams, but fossil experts and biologists classify them into different phyla (the next largest division below being in different kingdoms). Brachiopod shells have a different body alignment than bivalves. Imagine a little human inside the shells. In brachiopods, the little guy would be standing on the bottom shell and have his hand attached to the top shell. To open his shell he would push up with his “arms and legs” like doing deep knee bends. When at rest brachiopod shells are closed. They must exert energy to open up to eat and “breathe” via gill-like structures.

Bivalves have a different orientation. The “little person” in the shell would be lying on his side and when opening would spread its arms and legs apart. Bivalves live with their shells open at rest and must exert energy to close it and keep it closed.

For local fossil collectors trilobites are often the grand prize goal. Trilobites scavenged the sea floor during times before the dinosaurs. They are easy to identify by the three lobes or ridges that run from the head to tail along their backs. Since juveniles can also be preserved as fossils, specimens range from BB shot to about walnut size. Some, larger than a foot long, have been found near Dayton, Ohio.

Trilobites are arthropods like crawdads, lobsters, crabs, shrimp and even insects. They have jointed appendages, often bodies in three distinct parts (head, thorax, and abdomen), and most have hard exoskeletons. Trilobites from Devonian deposits near Fort Wayne and western Ohio have complex eyes, similar to the multi-lensed compound eyes of house flies. These eyes allowed the trilobites to see in over a 270-degree direction as they walked along the sea floor.

Arthropods molt or shed their outer covering and abandon it for a new, larger one. This allows for a unique opportunity for trilobites and their relatives to make more than one body fossil before they die. Most body fossils are death assemblages, meaning that the organism died and then the mostly hard parts were preserved.

The easiest way to identify a molt form, is how the trilobites severed the chitinous sheaf (fingernail like material) along a seam which went across the neck and along the sides of the face. Like cicadas that cling to trees in the summer as they molt, trilobites then crawled out of their “skin” and waited for their new exoskeleton to harden into a protective body shield. Until it did, like soft-shelled crabs, they were vulnerable to predation.

The exact role that trilobites played in the ecology of the shallow seas that covered much of the Midwest throughout the Paleozoic Era is still being refined. Some were most likely bottom crawlers and were predators to smaller organisms or scavengers. Some may have ingested sediment and sifted through it for needed nutrients. Some might have been grazers on algae and sponges. Others probably swam.

The last trilobites roamed up until the great Permian extinction interval that led to the beginning of dominance by the dinosaurs. Most likely they could not compete as other organisms began to specialize in the tasks that kept trilobites around for so long—nearly 300 million years.

You can dig* into history with your own hands, exploring the fossil record on many ACRES preserves. As you do so, take a moment to appreciate the land and the history it holds

*Figuratively speaking. Digging is not allowed in the preserves; visitors must take nothing, leave nothing, but by all means to enjoy what you discover.