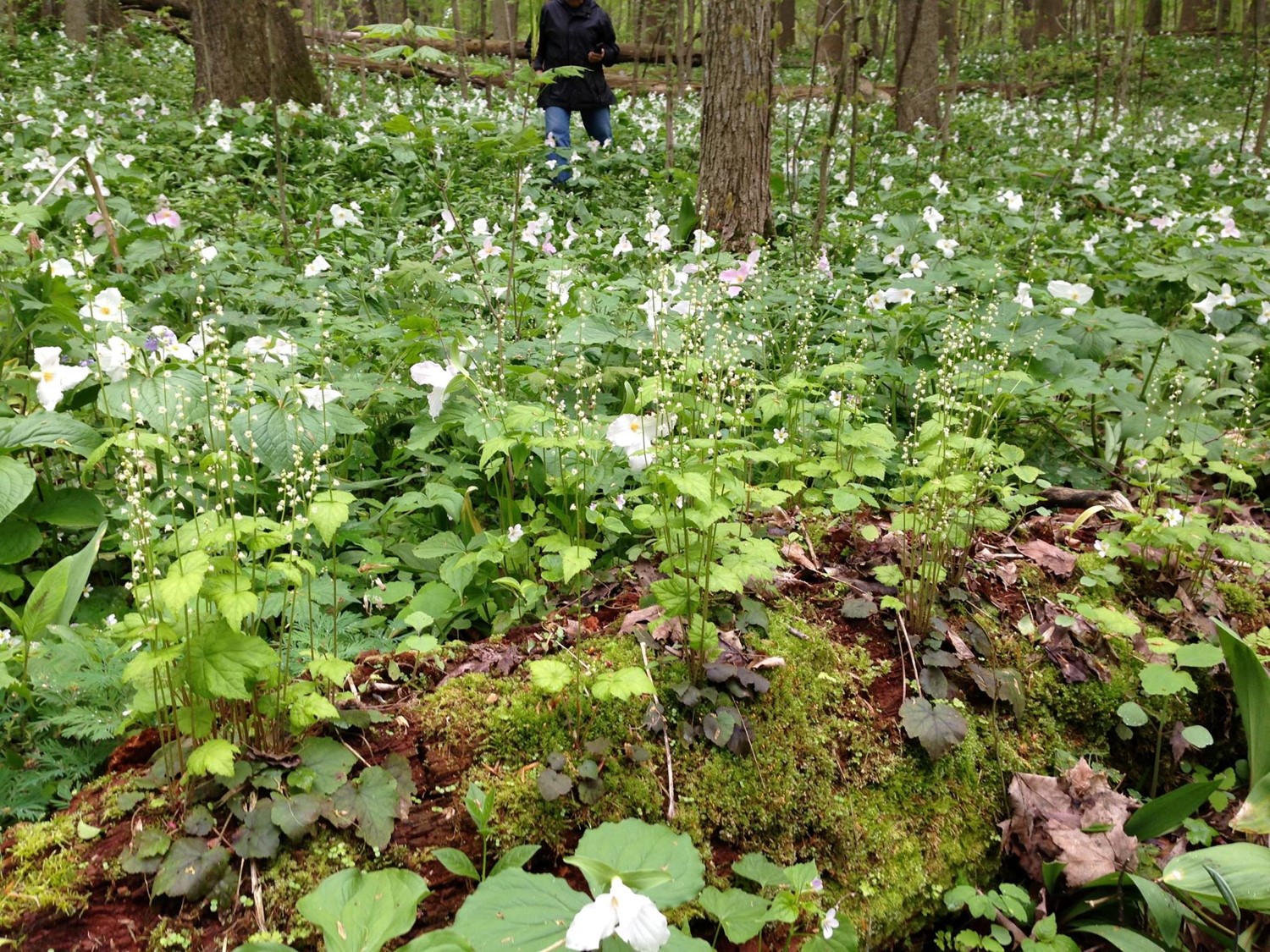 Actually the curtain parted over a month ago, but few people recognized that the show had started, for the first of our spring wildflowers to bloom is the skunk cabbage. The flower itself is inconspicuous and as the name indicates, the entire plant has a rather undesirable odor. The foul odor of this plant has a purpose; the only insect pollinators that are active that early in the season are flies and other insects that are attracted by such odors.

The real curtain opener is the hepatica that is in bloom right now (April). Its flowers range in color from white to pink and lilac and a deep purple. The leaves are three-lobed, shaped something like the human liver; this accounts for the plant’s name. They remain green all winter. Indeed, the flowers have been there too since last fall; they need only a few warm days to emerge from the protective soil and bloom.

Another early bloomer is the bloodroot. It too, is in bloom right now (April-May). It’s actually a poppy, and for that reason the flowers last for only a day or so. They are a beautiful white and come up protected by the green leaf, which clasps them until they are ready to burst into bloom.

The bloodroot gets its name from the blood-like juice, which the rootstock gives off, when cut or bruised. Don’t dig out the root to check – Take my word for it. The second act of the show, which is already beginning in some places (early May usually), has a new cast of characters. In wet meadows and along streams where the skunk cabbage bloomed and is not putting out large cabbage leaves, you find the marsh marigold; it’s a buttercup.

Out in the woods with the hepaticas and the bloodroots the dog’s tooth violet, nature’s own Easter lily, is beginning to appear. The Dutchman’s breeches soon follows. The flowers of this plant look like the pantaloons of a Hollander. Its leaves are delicate and carrot-like.

Another delicate flower that gets into the act at this time is the spring beauty. Each plant has a number of dainty pink flowers; the leaves look something like blades of grass. Along with it and the Dutchman’s breeches, you’ll see the wood anemone and the rue anemone.

Following this and overlapping a bit is a third act in which we have the trilliums. The wake-robin or bloody butcher is the first of these to bloom. The big white grandiflorum will show up just as the second act draws to a close.

Then, toward the end of May we get a finale on our spring wildflower show. That’s the time of the geranium, the violets, and the Mayapple. With that the show closes and we get an entirely different set of wildflowers: the early summer wildflowers of the woods, our Solomon’s seal, Jack in the pulpit, and the like. At last the summer show moves out of the woods – it’s too shady once the trees fully leaf out, and our wildflowers are then only found in the open places such as meadows.

It’s spring! Now’s the time to enjoy the show!