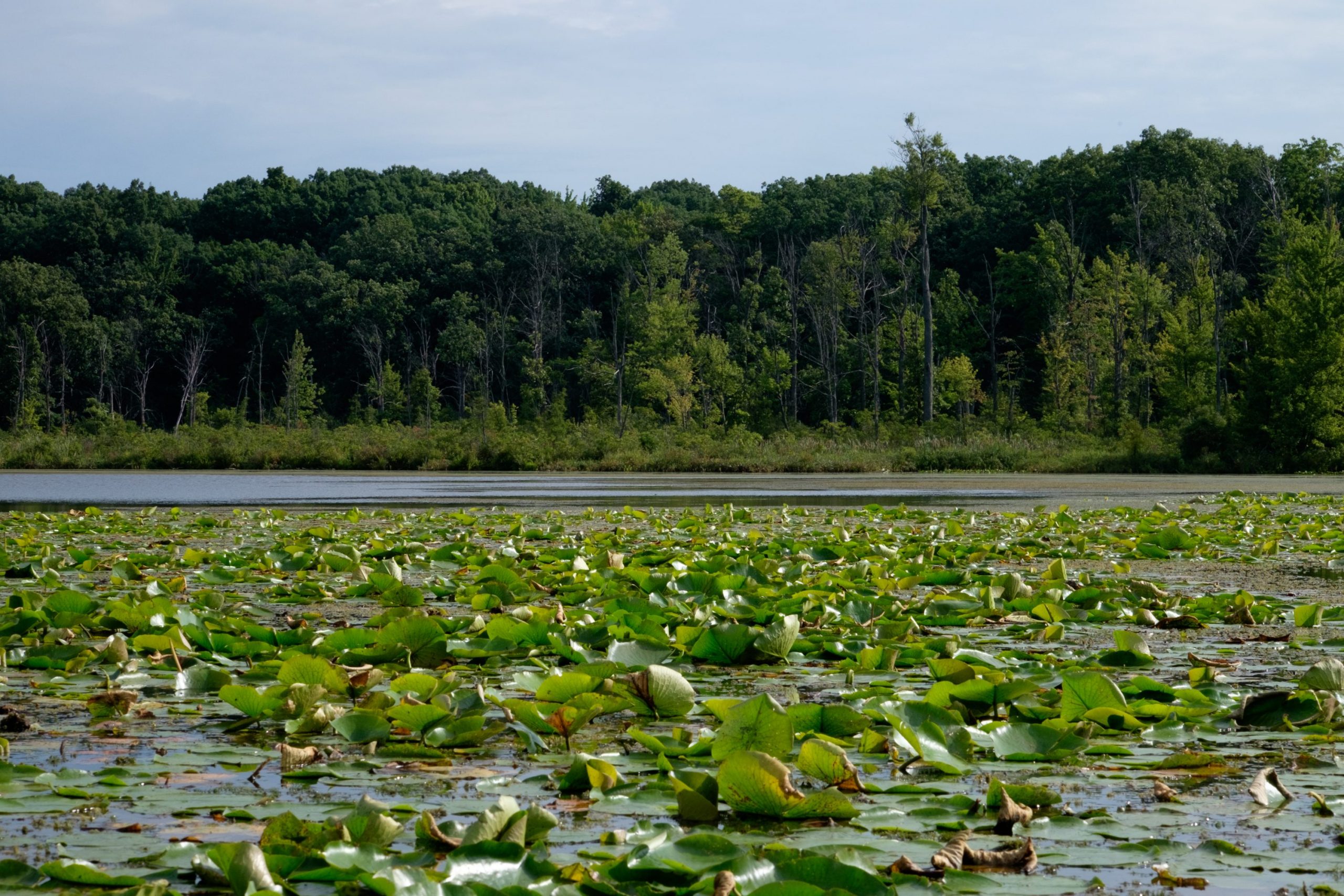 Scott Namestnik’s eagerness to explore Quog Lake last summer was quickly replaced with trepidation. “It has to be the most challenging site on which I’ve ever conducted a survey,” he said of the ACRES Land Trust property in LaGrange County.

Namestnik works for Orbis Environmental Consulting, which ACRES hired to conduct a “floristic quality assessment” at the 126-acre property along the west side of Quog Lake.

What he found was a rich diversity of plants. What he didn’t find were trails.

“An old boardwalk made of wooden pallets goes down to the lake, and the ground is unstable. You’re basically walking on a flooating mat that you occasionally stay on top of,” Namestnik said.

As he discovered, you can fall through. “On those occasions, it’s not easy to get out,” Namestnik said. “It’s extremely slow walking… slogging? Once I kind of got stuck, wasn’t sure I was getting out. The only thing to grab is poison sumac.”

Quog Lake, five miles south of LaGrange and a half-mile west of Oliver Lake, is one of eight properties in the area owned and managed by ACRES, the Indiana Department of Natural Resources, or LaGrange County. Together, they protect just over 800 acres.

“On its own, Quog Lake is worth protection due to its unique features— floating bog, rare plant and animal species, great habitat,” said ACRES executive director, Jason Kissel. “But its significance is also due to its location within a complex of other natural areas.”

Except for occasional members-only guided trips, Quog Lake is off limits to public visitation. “It’s primarily to protect the rare systems, plants and animals,” Kissel said. “And yes, it’s a difficult property to access— nearly all wetlands, and the floating bog can prove dangerous to walk on.”

Namestnik was aware of Quog Lake after reading about it in Natural Areas of Indiana and Their Preservation, a book published in 1969 by Purdue University professor Alton Lindsey and two of his graduate students, Fr. Damian Schmelz and Stanley Nichols.

After Indiana’s General Assembly passed the Nature Preserves Act in 1967, the trio crisscrossed the state to find and identify naturally significant sites worthy of protection under the new law. Their book became the blueprint for the DNR’s edgling Division of Nature Preserves, following in the footsteps of efforts ACRES had begun nearly a decade earlier.

Namestnik made a total of five visits to Quog Lake during May, June, July, and September “to hit all the variabilities of seasons—some things not as obvious in spring are more obvious in the fall,” he said.

Each foray involved a zig-zag meander, each different from the previous. The intent to cover as much of a site as possible wasn’t doable at Quog Lake. “A square site would be easy,” Namestnik said. “But the Quog Lake site was a bit more challenging because it is not square, has two lakes and several ditches (some unseen), and given the site’s size, I wasn’t able to cover as much as I’d planned in the allotted time.”

“As a botanist, I try to stress that monitoring and knowing what you have is a part of stewardship,” Namestnik said. “There’s definitely a sense of accomplishment. I feel like my work is helping ACRES know and understand the resources present on their properties, and how best to manage for them.”

This land is being conserved, in part, by funding made available as mitigation for habitat loss or forest fragmentation caused by the construction and maintenance of the NIPSCO Reynolds Topeka Electric System Improvement Project. The Conservation Fund and the U.S. Fish and Wildlife Service have partnered to manage these voluntary mitigation funds and provide grants to implement local conservation measures in Indiana to protect and restore critical habitat for migratory birds under the Migratory Bird Treaty Act.

Learn in the field with an expert! Participants will spend only a few hours in a classroom; ACRES’ Wayne Township Property in Warsaw, a rare native prairie that is closed to the public, serves as the main venue. To aid your learning, you will receive a custom folding chair and a notebook to create your own “field guide” for continued study. Following the workshop, you will receive a certificate of completion.