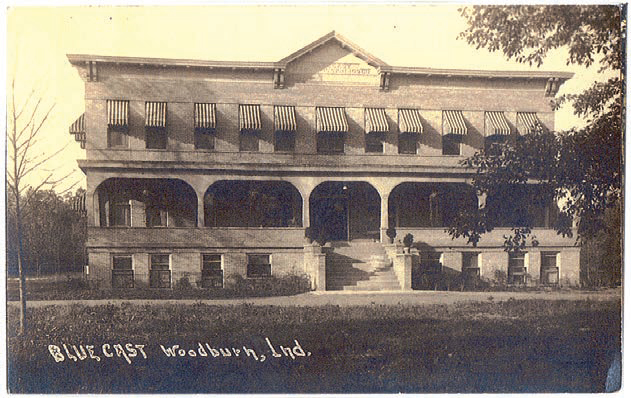 Back in 1901, New Haven resident Henry Schnelker was attracted to an 87-acre plot with a flowing mineral spring, and he decided to purchase the land.

Once described by a local newspaper as a “magnificent natural beauty spot nestled on the lofty banks of the Maumee,” the name “Blue Cast” came from the mineral spring’s bluish color. In addition, it seemed to have evidence of a unique magnetic force not typical of mineral water. People discovered its attractive drinkable qualities seemed to be an invigorating tonic with metabolic properties. Those rumored to know the place said iron or steel left in the water for a time became magnetized.

In 1902, after installing a pump to access the deep ravine where the spring was found, Schnelker began producing over a hundred cases per day. It wasn’t long before Schnelker’s blue and yellow bottle label was seen throughout the United States and around the world. Bold letters proclaiming  “Blue Cast Mineral Water” surrounded an illustration of the “Fire Proof Sanitarium.” The six-fluid ounces were described as being “Carbonated and Bottled at the Springs,” coming from “the Blue Cast Company, Woodburn, Ind,” and the waters had received the “Highest Award at St. Louis Exposition.”

To satisfy demand, Schnelker built a large reservoir, holding some 5,000 gallons of the ever-growing-in-popularity beverage, to collect the waters twenty-four hours a day all week long. The spring offered up a steady stream of water which served the business well for over a decade. In fact, thirty-five cement steps placed in the side of a hill accessing the ravine to the reservoir are still present on the property.

South of the mineral spring, another spring was found that produced sulfur water and mud, which spawned still another business – this one to attract people seeking the benefits of therapeutic baths. Although Henry Schnelker intended to open a sanitarium to take advantage of the newfound opportunity, in 1912, A.C. Hogue of Toledo, Ohio, bought the property. Initiating a financing strategy selling stock at $1 per share, he found a ready market among the region’s farmers and businessmen. Hogue moved his family into a large farmhouse on the property. An established building contractor with the necessary equipment and machinery, Hogue had the wherewithal to use the ground’s sand and gravel to construct a large sanitarium made entirely of cement and steel. As L. Kathryn Moser, Mildred Becker and Gilbert Souder wrote in a history titled Home Community, U.S.A., the sanitarium had a large lobby and dining room, a modern kitchen and two small lounge rooms on the first floor. On the second were sixteen bedrooms.

John Beatty and Delia Bourne wrote about Blue Cast in the History of Fort Wayne and Allen County, noting that a wing was added for mud baths and guests could tour the beautiful grounds with visitors.

After opening the Sanitarium for business on July 1, 1913, Mr. Hogue continued expanding the Blue Cast Mineral Water bottling operations and found a buyer in 1926. It was sold to a group of Cleveland businessmen who closed the business in 1955. Beatty and Bourne wrote, “the broker who had sold the original $1 shares of stock kept 60 percent of the proceeds for himself, passing on to the company only 40 percent.

Capital was soon exhausted, and stockholders refused to invest any more money.” The sanitarium remained closed until a Mr. William Biebesheimer of Toledo purchased the property, intending to re-open it. Soon afterward, the Great Depression hit, forcing a second closure. The property went through several owners and periods of vacancy.

During the years the building stood vacant, nearby youth imagined the place to be haunted, and soon after, the structure suffered at the destructive hand of vandals. Nancy Venderly, writing for the Journal Gazette, noted that during Prohibition days the sanitarium was alleged to have been used as a “speak easy,” and rumors circulated that Al Capone frequented the place. In 1939, the sheriff’s department arrested forty-two people between the ages of fifteen and twenty-six and took them before the county prosecutor who gave them a scolding before permitting their release. Gradually, all evidence of the sanitarium has disappeared other than the footprint of the old cement foundation.

I grew up in Woodburn and we played at Blue Cast when we were kids.

Thanks for sharing the memory, Henry! Hope you've had a chance to visit it in recent years:)

I road by Blue Cast on the school bus every day. It was often said that the place was haunted.

Thanks for sharing, Linda! This property certainly has a fascinating history.