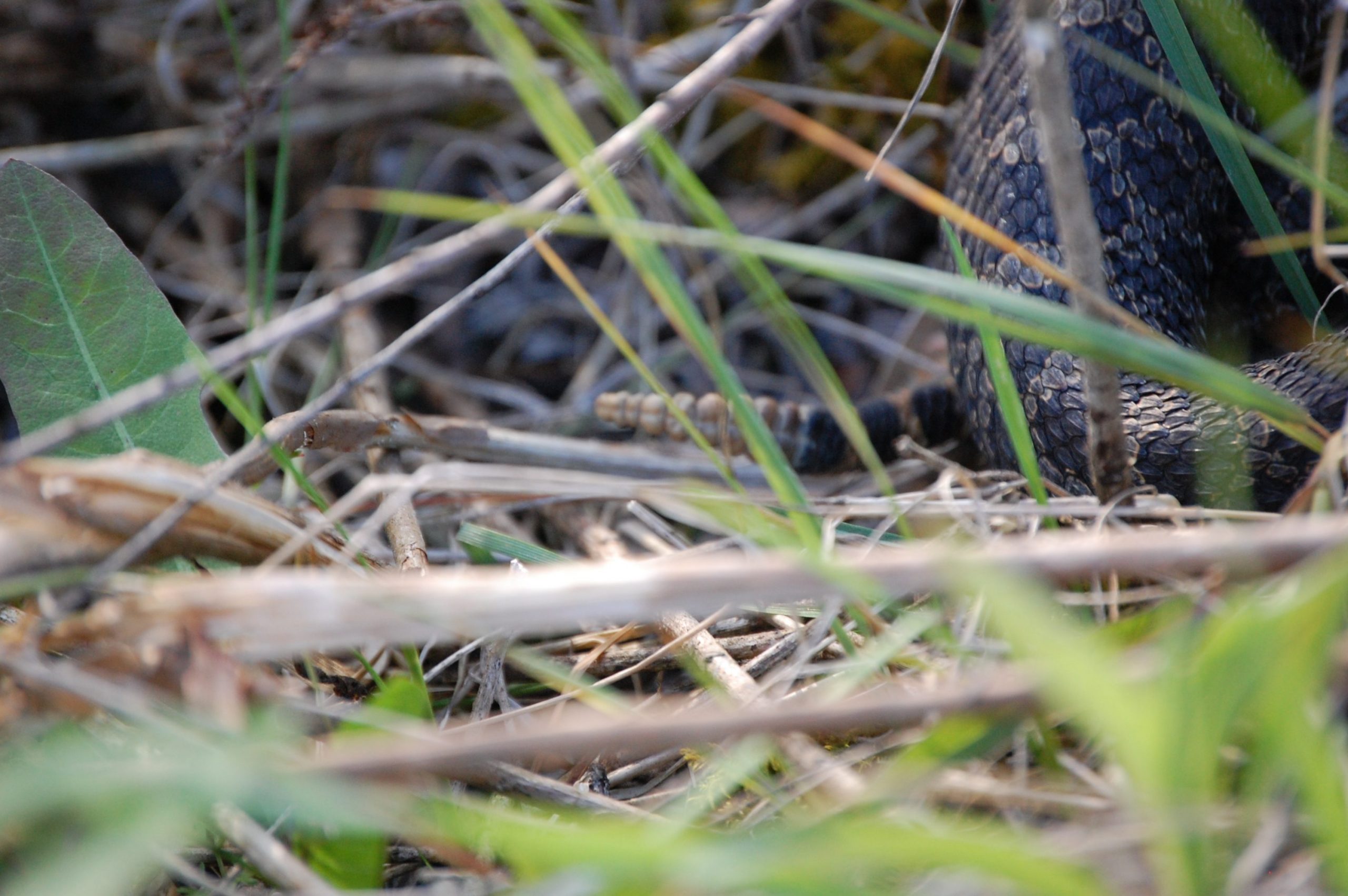 ACRES lets nature take its course on the preserves, with the exception of eradicating invasive species. Normally, an endangered or threatened species found on an ACRES property is recorded but not actively managed. This year ACRES is working to develop a management plan based solely around one specific, scaly species.

Buzzing cicadas, croaking frogs and the sound of a rattle add to the chorus of a morning marsh. You see a blue heron flying. Then…wait…did you hear a rattle? Curled up in the sedges you see a brown spotted snake with a rattle raised in the air, a kind warning that its personal space is being invaded.

Eastern Massasauga Rattlesnakes are the only species of rattlesnake found in northern Indiana. These snakes are state endangered and federally threatened, granting them protection against poaching. Loss of habitat is their biggest threat. ACRES protects several properties with suitable habitat for Massasaugas.

“Snakes were seen along the trails at ACRES Marsh Wren Nature Preserve, and we knew we had to act. Maintaining the trails with a mower was a threat to the snakes, so we decided to close the preserve to protect their population,” said Director of Land Management Casey Jones. “They’ve also been spotted at surrounding closed preserves in LaGrange County.”

Overseen by Land Management Specialist Evan Hill, ACRES developed a multi-year research project based on these questions. The project consists of different techniques to determine the size of the local population.

“Knowing how many snakes are out there may help us make informed management decisions,” said Hill. “To maintain the population, it’s possible we may need to manage these properties in a different way than we ever have.”

A Massasauga’s preferred habitat is large, open wetlands, like grassy marsh or wet prairie. Here they hunt for small rodents, frogs and occasionally other snakes, keeping these populations in check. In turn, the snakes become food for hawks and other raptors. During winter, they use abandoned crayfish burrows for hibernation.

“Research shows that enhancing habitat by reducing cover can help to increase Massasauga populations,” says Hill. “This means removing brush that has begun to naturally move into these open areas. It’s possible that enhancing wetlands and adjacent upland habitats will benefit many other native plant and animal species as well.”

“Massasaugas are shy and rattle only when absolutely necessary. Their cryptic coloration makes them hard to spot among the grasses,” Hill said. “We had to implement some unique methods to observe and record them.”

Camera traps made out of buckets and trail cameras were constructed and set up at the properties. Fabric fencing was placed alongside each trap. Snakes will run along the fencing until they slither through the buckets for a snapshot. Each snake has a unique pattern, and from that pattern, Hill can determine how many different snakes pass through the buckets.

Multiple times a week, trained volunteers conduct in-person surveys. While walking on a set path, volunteers record how many Massasaugas they see or hear. Large cover boards placed around the property are checked for snakes basking in the sun.

ACRES also sent mail-in surveys to neighbors around the preserves. Responses indicated that many neighbors had seen Massasaugas in the area. Sadly, most were spotted alongside the road, having been hit by cars. Neighbors reported roadside sightings in one specific location.

“It appears that Massasaugas are crossing the road in a certain narrow area. It’s possible, with the help of multiple partners, we could create a small wildlife crossing under the road,” said Jones. “ACRES can protect and enhance the snake’s habitat, but without addressing the active threat of vehicle-caused mortality, their population is still threatened.”

As Land Management continues to receive results from the surveys, different perspectives are surfacing. New questions and solutions are part of an ever-updating management plan.

“We hope this multi-year study helps ACRES, and our neighbors, understand the situation Eastern Massasauga Rattlesnakes are in,” says Hill, “We want to make the best decisions to protect this species from extirpation.”

Thanks to support from the Fort Wayne Children’s Zoo, Greater Olin Lake Conservancy, Irving Materials, Inc., and the LaGrange County Community Foundation, ACRES is able to continue this study.

I took a picture of a snake and was wondering if it is a rattlesnake. How can I send a pic to you.

We'd love to see (and share) your photos from the preserves! You can send them to [email protected] We look forward to your email!